For the Android faithful out there that have been patiently awaiting the release of Samsungs next Android tablet, the Samsung Galaxy Tab 10.1 with 4G LTE capability, it appears that your wait to snap up the Sammy slate is about to come to a reasonably quick end as the release date for the device has now been confirmed.

According to the guys over at Droid-life, it was expected earlier in the week that the shipping date for the Samsung Galaxy Tab 10.1 4G would be the 26th of July, which should mean the official release date for the tablet is the 28th of July, and apparently this date has now been confirmed by way of Verizon.

According to the article the black/metallic grey model of the Samsung Galaxy Tab 10.1 4G will be available to purchase via online and in stores whilst the white model of the tablet is only become available through direct fill.

Price wise the 16GB Samsung Galaxy Tab 10.1 will set you back some $529 when signing on for the usual 2-year agreement and the 32GB slate will command a price tag of $629 again with the same 2-year contract.

The Android slate will also come with a virtual QWERTY keyboard with Android and Samsung keypad options, all the usual Google services such as Gmail, Google Talk with video, Google Maps, along with Samsung Hub, and measures 10.10 x 6.90 x 0.34 inches and weight is at 1.25 pounds, and as for battery life the usage time is up to 12 hours or up to 400 hours standby time.

So there you go, not too long to wait now until you can actually get your mitts one the Samsung Galaxy Tab 10.1 and start playing on Verizon’s 4G LTE network. So any of our readers hoping to snap up Sammy’s latest Android slate come the 28th? 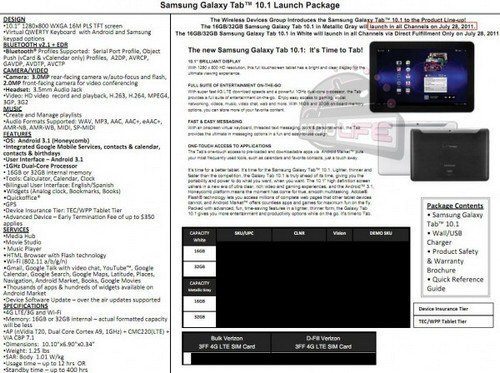