It appears that over here in the United Kingdom, Motorola has got into a spot of bother over their claim that the Motorola Atrix handset is the world’s most powerful smartphone, and word is there have been complaints made to the UK Advertising Standards Authority.

According to the guys over on Engadget, have the draft recommendation to the UK Advertising Standards Authority, which can be seen below, and challenges a TV advert shown on July 4th that states the Motorola Atrix is “The world’s most powerful smartphone.”

Apparently two people sent in the complaint that believe that the Samsung Galaxy S II has a more powerful processor and thus challenges whether the claim is misleading.
As you probably are aware, the Motorola Atrix sports a 1GHz processor while the Samsung Galaxy S II packs a 1.2GHz CPU, and on this basis it appears that the UK Advertising Standards Authority is to uphold the complaint, meaning Motorola will have to cease calling the Motorola Atrix the world’s most powerful smartphone, over here in the United Kingdom anyway.

According to that draft recommendation, Motorola claims that although the Samsung galaxy S II does have a slightly faster processor, the smartphone doesn’t operate a computer-like accessory ecosystem like the Motorola Atrix, and state that the TV advert doesn’t claim the Motorola Atrix’s processor is the fastest.

However, it does appear that according to the Motorola Atrix Most Powerful Claim Misleading Says UK ASA, the Motorola Atrix most powerful smartphone claim is somewhat misleading and thus the company will need to come up with another catchy line to induce potential customers to pick up the Android handset in the UK.

Personally, whether a manufacturer claims their device is the worlds most powerful doesn’t sway me in the least when I choose a device, so perhaps making a judgement to uphold the claim, as being misleading based on just two complaints is being somewhat harsh on Motorola, but on the other hand, Motorola’s claim of the Atrix being the worlds most powerful smartphone probably wasn’t all that fair on other smartphones that have become available since the Atrix.

So what do our readers here in the UK think, do you believe Motorola is misleading people by claiming the Motorola Atrix is the worlds most powerful smartphone, or do you feel that the claim doesn’t really make any difference when someone considers picking up a new handset? 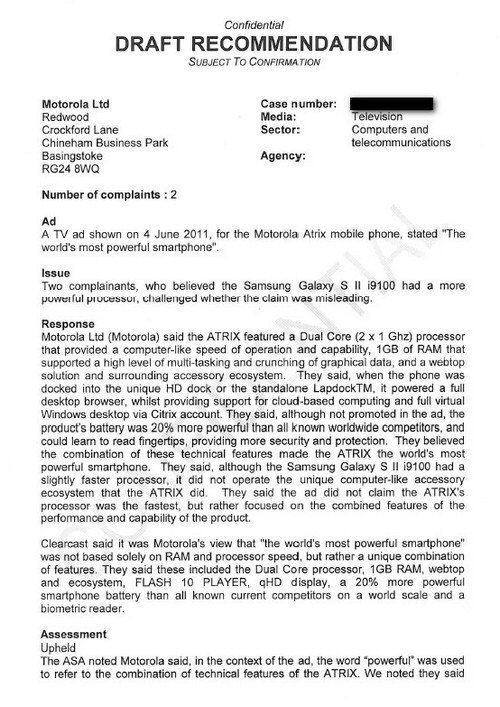