Now come on guys, even if you are an iOS geek, we know you like looking at pretty girls clad in a bikini, and now you can do so on your iPhone, iPod Touch and Apple iPad with the release of the Top Bikini 1.06 App for iOS devices, a unique photo-sharing application that’s dedicated to the world of bikinis.

Obviously the iOS app isn’t just for guys to leer at scantily clad women, as the app is also targeted at the ladies to share and upload their bikini photos to enter a monthly contest where users vote for their favourite bikini pictures, and the top 3 voted pictures will win a prize for the models, with the top monthly winner receiving a feature shot on the Top Bikini calendar.

With the Top Bikini app for the iPhone, iPod Touch and Apple iPad users can browse numerous images along with photographers having their work receive exposure and models and would-be models to be seen by a vast array of people across the globe.

The Top Bikini iOS app features the ability to view photos by ranking, recent upload and favourites, images are kept in the gallery for a 30-day period, the ability to share images via email and Facebook, the ability to take part in contest judging, unlimited uploading of images and unlimited voting, and the ability to browse bikini styles trending around the world.

Contest rules are that a picture must receive one of the top three places for most votes in order to win a prize for the model, such as a $500 iTunes gift card, and the top winner of each monthly round will be offered a feature spot on the annual Top Bikini calendar, and you must be 18-years of age or older to enter the contest while no nudity or inappropriate pictures are allowed.

So there you go, now female iOS users can show off just how great they look in a bikini and stand a chance to win prizes, and the male iOS users get to look at pictures on nice ladies wearing just a bikini, so a win, win situation.

So for those that wish to grab the Top Bikini app for their iPhone, iPod Touch or Apple iPad running iOS 3.1 or above, you can grab the app for free by hitting up iTunes. 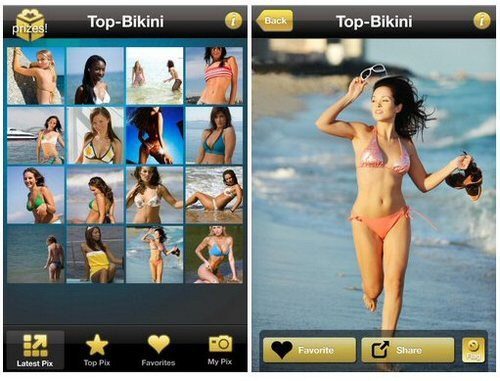