Flowd App for iOS Android and Ovi Gets Updated

As part if their Frequent Fans mobile commerce marketing tool for music artists, Flowd has now updated their Flowd app for iOS device, Android devices and Nokia handsets with enhanced high-end features for the end user and an Offers feature for music artists to enable music artists to offer tailored campaigns to reward fans.

The Flowd app for the iPhone, Android and Nokia handsets now offers an enhanced Offers feature that delivers control to the artist to reward their fans with mobile coupons issued by a number of differing trigger options.

Apparently these trigger options include event check in via the app, location based check in via the app, the ability to follow and artist, post on an artist’s wall and more. Furthermore the mobile coupons can be awarded as part of a contest with randomly selected winners, or simply as a reward for everyone who participates.

This means fans of Flowd will get access to exclusive rewards simply by interacting with their favourite artist on Flowd while other features include improved Soundcloud and YouTube intergration to enable fans to watch and listen to their favourite artist’s latest song without leaving Flowd.

By using Flowd, music fans can also use a wide range of social networking features including check-in to places, send messages, share pictures and connect with friends through Twitter and Facebook and customize the look and feel of Flowd by re-skinning the app with artists’ themes.

Music fans with the iPhone can download the free Flowd app from iTunes, while Android user can grab the app for free from the Android Market and the Nokia faithful can pick up the free app from the Ovi Store. 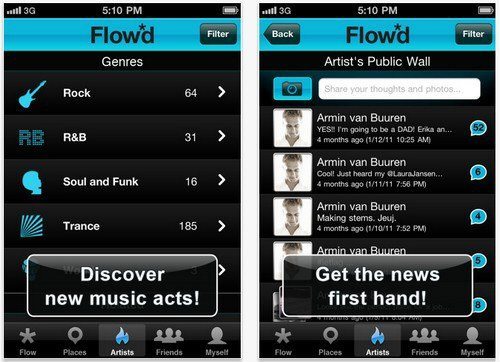