If you are of the ilk that would like to purchase the first webOS tablet out of the HP camp but thought the slate was a bit expensive, you might like to hear that HP is now slashing the price of the HP TouchPad by way of offering a 50 buck instant rebate if purchased online up until the 10 of September.

According to an article over on PC World, HP is offering both the 16GB version and the 32GB model with the $50 instant rebate offer attached which means the new prices for the HP TouchPad are $449.99 for the 16GB and $549.99 for the 32GB.

Although apparently Office Depot is offering the HP TouchPad for the same as HP, but apparently Amazon has cut the asking price for the webOS 3.0 slate and offing the slate for just $449.99 for the 16GB model and $539.51 for the 32GB.

Thus it appears that maybe the HP TouchPad and its webOS operating system are having a bit of a hard time trying to compete against the likes of the Apple iPad 2 and Android tablets in the mobile space, which is probably the reason HP has began this instant rebate offer, so they can drum up more interest in the device.

For those that might be pondering on the idea of purchasing the HP TouchPad the tablet offers a 9.7-inch XGA capacitive multi-touch display, 1.3 front facing camera for video calling, 1.2 GHz Snapdragon processor, WiFi connectivity, Bluetooth 2.1, 16GB or 32GB internal storage, webOS 3.0 operating system, 3.5mm headphone jack and weighs in at 740 grams.

If you are in need of a video that compares the HP TouchPad up against the Apple iPad 2 then you can view that video by hitting up this article (here).

According to the article, program VP at research company IDC, Bob O’Donnell says that the price drop indicates that the HP TouchPad isn’t selling well and at about 1.6 lbs the device is hefty along with having poor app support, and states “You can’t sell a tablet at the same price as Apple and expect to sell it. It feels more like an iPad 1 in the era of an iPad 2.”

So, what do our readers think about the HP TouchPad and webOS, has webOS basically had its day in the mobile arena and should be sent out to pasture, or should HP deliver more webOS based tablets after the TouchPad? 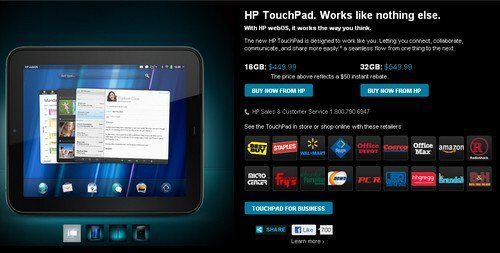