Spec wise the BlackBerry Torch 9810 retains the same form factor as the original Torch with its vertical slide out QWERTY keyboard, but ups the ante when it comes to processor, and sports a 1.2 GHz CPU, along with a 3.25-inch touch screen, 5 megapixel auto-focus camera with LED flash and 720p video.

That “first 4G BlackBerry smartphone claim is of course based on AT&T’s HSPA+ that is available in limited areas, and well some consider HSPA+ not true 4G but there you go.

Unfortunately though the AT&T coming soon page doesn’t deliver any information as to just when AT&T will release the BlackBerry Torch 9810 to their customers nor does it give any indication as to what the smartphone may command price wise.

However for those that are interested in the BlackBerry Torch 9810 you can of course hit up the coming soon page and enter your email address to be updated on the 4G BlackBerry device availability.

Are any of out readers holding out to pick up the BlackBerry Torch 9810 from AT&T? If so feel free to let us know what attracts you to the smartphone by posting to our comments area below. 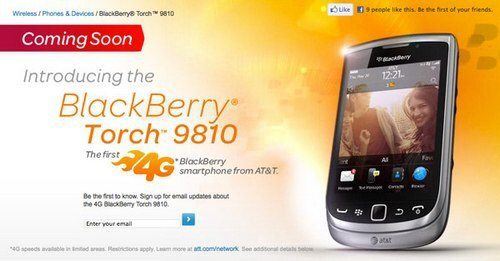