It appears that smuggling Apple iOS gear to China has taken quite a unique turn in the way certain smugglers get their Apple gear such as the iPhone and Apple iPad 2 across the boarder from Hong Kong with iPhone and iPad units making night flights on a zip-wire across the small river that separated Shenzhen from the northern parts of Hong Kong.

According to an article over on Micgadgets, these daring smuggles used an elaborate pulley system to ferry each and every iPhone and Apple iPad across the border concealed in black nylon bags as not to be seen flying through the air at night during the covert smuggling operation.

Apparently this is how the ingenious smuggles carried out their flying iOS products operation, they shot a cable across the border using crossbow, and the cable was fixed to two high-rise buildings in Shenzhen, then the Apple iPad 2 and iPhone units were placed in individual nylon bags and then moved along the cable several hundred metres from a house in Hong Kong.

As for travelling time for each smuggled device, well apparently it takes roughly two-minutes for one of the black nylon bags to span the distance between start point to end point.

Hong Kong and Chinese custom officers discovered a 300-metre cable running across the Sha Tau Kok river, and officers say the operation was carried out in the early hours of the morning to avoid detection.

However, after a major customs surveillance operation the six smugglers have now been apprehended and 50 iPhone 4 handsets and Apple iPad 2 tablets were seized, the total value of which comes to roughly 300,000 yuan, which is about $46,583.

We have a visual report on the investigation into the Apple gear smuggling operation, which although the commentary is in Chinese, we do get to see just what lengths smugglers will go to, to smuggle iPhone and iPad 2 units.

Apparently as Hong Kong and China run independent tax and legal systems, smugglers in China frequently try to obtain tech gear from Hong Kong so they can make a profit on the lower price tag.

I can envision it now, numerous little black bags all suspended on a cable snaking their way across that river lit up with the backdrop of the moon making it look like some major jewel heist in a big action movie, and all for the iPhone and iPad 2. 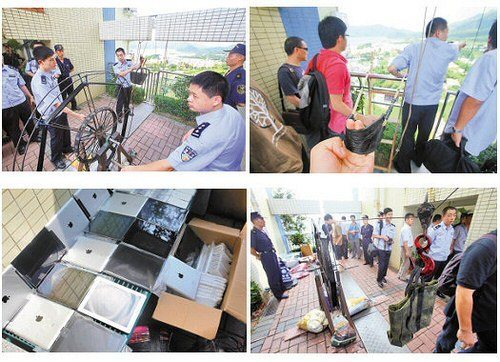