Galaxy Tab 8.9 Shown Off on Video

The Samsung Galaxy Tab 8.9 hands-on footage comes our way courtesy of the guys over at Tecca and delivers just over two minutes of getting up close to Sammy’s next Android slate which will ship with Samsung’s TouchWiz UI aboard.

The guys say that the Galaxy Tab 8.9 is a lot like its bigger sister but obviously more compact, and there are a couple of hardware differences such as rather than on the left side, the volume and power controls are at the top of the Galaxy Tab 8.9, and the speakers sit either side of Sammy’s propriety port at the bottom of the device.

Obviously the major difference between the two Samsung slates is the size and weight, thus sitting between the larger 10-inch tablet and smaller 7-inch slates, the Samsung Galaxy tab 8.9 just might suit your requirements.

As the narrator in the video footage says, the Samsung Galaxy Tab 8.9 is, awesome, little, different, and sweet, and comes with Amazon MP3 preinstalled.

Price wise reports back in May had it that the Galaxy Tab 8.9 for Europe would command a hefty price tag at a rather wallet unfriendly â‚¬606.50, which is roughly $853 although that pricing hasn’t been confirmed.

Anyway that’s more than enough from me as I’m sure all you really want to do is head on down to mash that play button to check out the hands-on with the Galaxy Tab 8.9, so get to it…enjoy. 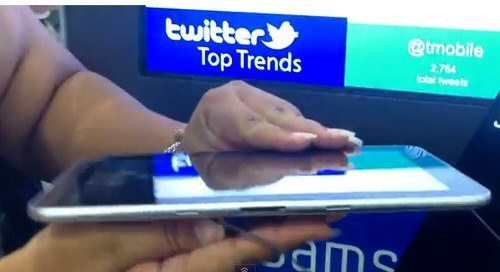