Here’s a quickie for the BlackBerry smartphone faithful on the Sprint network, Sprint has recently announced they would be offering the latest smartphones out of the Research In Motion camp, namely the BlackBerry Torch 9850 and BlackBerry Bold 9930 but didn’t state when you would be able to grab them, but now we know.

Furthermore just what both BlackBerry smartphone will hit your pocket for has also been revealed, with the BlackBerry Torch 9850 commanding a price tag of $149 when signing up for the usual 2-year term or if you prefer off contract the Torch 9850 will cost you $449.

As for the pricing of the BlackBerry Bold 9930, it cost a bit more than the Torch 9850 as you can grab it from Sprint for a $249 based on that 2-year contract of course, or without commitment the handset will set you back $499.

So that’s just about your lot, you now know when you can snap up both BlackBerry handsets if your preferred carrier is Sprint, and just how much those devices will set you back, so you can’t ask much more than that can you.

So we’d like to know if any of our Blackberry loving readers out there are planning on picking up one of these smartphone from Sprint and if so which one have you opted for an why? Feel free to let us know by posting to our comments area below. 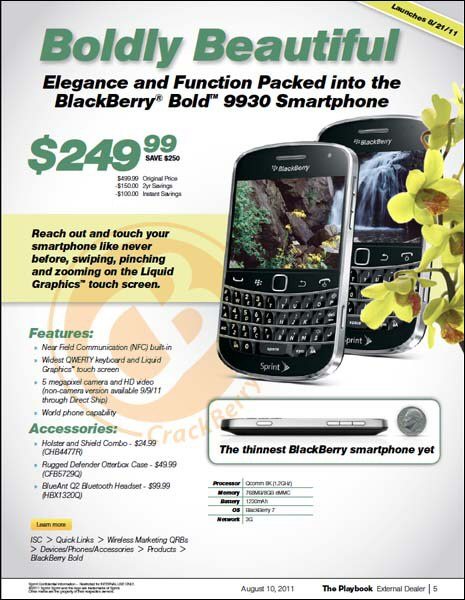