iPhone 5: All The Rumoured Features In One Nice Video

Well the video we have for your viewing entertainment below is no doubt designed to get the iPhone faithful drooling over that the iPhone 5 could possibly bring as this footage rounds up all the next generation iPhone rumours neatly and makes a nice change from seeing them in a static infographic.

The iPhone 5 rumour roundup video comes our way courtesy of the guys over at 9to5 Mac and by way of French website No Where Else and delivers an almost two minutes of footage showing off what has been rumoured in the past for Apple’s latest iOS handset offering.

As you may know, Phones Review colleague Mark yesterday posted his own attempt at an iPhone 5 features and why you should get it infographic, but one does have to say that this video has done a far better job as getting those iPhone 5 rumours out to the public…sorry Mark.

Anyway in the video you will see numerous iPhone 5 rumours along with their expectation percentage rate, rumours such as the same design pulling in 30 percent, while a new design pulls in 70 percent, without a home button gets 20 percent while a bigger screen gets 95 percent and so on.

When it comes to the possibility of the iPhone 5 becoming available in white like the iPhone 4, well that obviously has more chance of becoming a reality so pulls in 100 percent.

The makers of the video even go as far as attempting to show what they think the iPhone 5 will actually look like once the beloved Apple smartphone finally comes out to play, of course that would also be based on rumours and speculation as I’m pretty sure they don’t have insider knowledge as to what the final design will be.

Obviously the footage doesn’t mean that that all or indeed any of the rumours will actually find their way onto the iPhone 5 so as with all things of this kind should be treated and an extension to the previously heard rumours and taken with the usual large pinch of salt.

So head on down, mash that play button and check out the iPhone 5 rumour roundup, and if you feel something has been missed or you have some other feature you think Apple might come up with feel free to let us know by posting to our comments area below…enjoy. 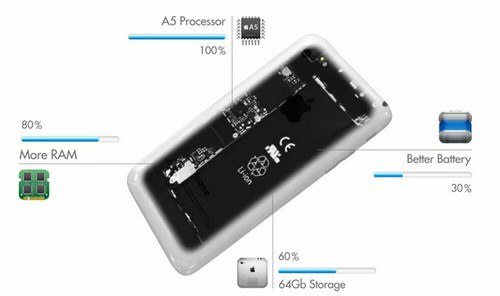 One thought on “iPhone 5: All The Rumoured Features In One Nice Video”