It seems that the Dell Streak 5 has just about outlived its usefulness, as the latest word is Dell has now put their official stamp on the device as no longer available. The Dell Streak 5 was billed as a smartphone/tablet, but obviously wasn’t really either and albeit running the Android operating system, just after a year of being released the device is headed for the mobile graveyard.

According to the guys over at Liliputing, Dell has now officially discontinued the 5-inch smartphone come tablet and have put up a web page announcing the fact, a page where they also offer alternative to the Dell Streak 5.

The Dell Streak 5 has been out of stock for quite a while already at Dell so I figure they decided to put the final nail in the Streak 5’s coffin at last, and move on to other offerings.

The Dell Streak 5 unfortunately was too large to be what one would call a comfortable in the hand smartphone, but on the flip side was also just too small to be called a full on tablet, so perhaps this is the reason the Streak 5 has reached the end of its usefulness, as the tablet space is now offering larger devices in the 10-inch range that seems to be the most popular size, probably due to the Apple iPad of course.

Have to say though, personally I believe there are far better tablets and smartphones out there that offer much more than the Dell Streak 5, so its loss probably wont be missed much by many. 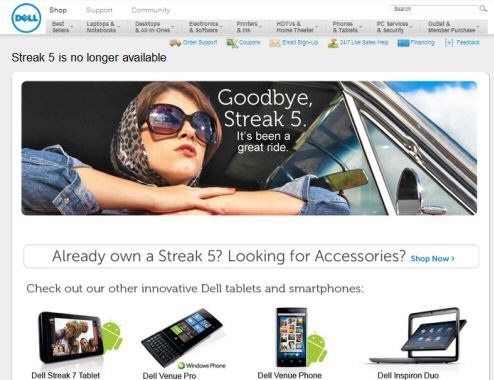