As you are probably aware the current much sought after smartphone from the Samsung camp is the Samsung Galaxy S II, and although currently the Galaxy S II isn’t available over the pond in the good old US of A, Samsung is sending out invites to an event for the 29th of August that just might change that.

According to the guys over at Phone Arena, the Sammy invitations say a “major product announcement” and this event will take place on the 29th of this month in New York, so what makes one think it could possibly herald the arrival of the US Samsung Galaxy S II?

Well the reason it is believed that this “major product announcement” will concern the Samsung Galaxy S II is because the invitation ends with a big quite noticeable “II”.

Apparently the Sammy event will be held at The Shops at Columbus Circle mall on the 3rd floor with doors being opened at 6PM.

The Samsung flagship smartphone has been available in other countries for quite some time but for some reason has taken its time making it to US shores, where rumour has it that the Android 2.3 Gingerbread smartphone will be eventually hitting all major US carriers.

The original Samsung Galaxy S was a big hit for Sammy and personally I have handled the UK Galaxy S II and have to say it is a very nice device, so for all you Android faithful over in the land of the free, you just might have a Galaxy S II to call your own after the 29th of this month is all turns out to be spot on.

Of course those specs might change somewhat with the US version and for each carrier, but no doubt if they do we will find out after that 29th of August event. So how many of our US readers will be overjoyed if Samsung does indeed announce the US Galaxy S II? 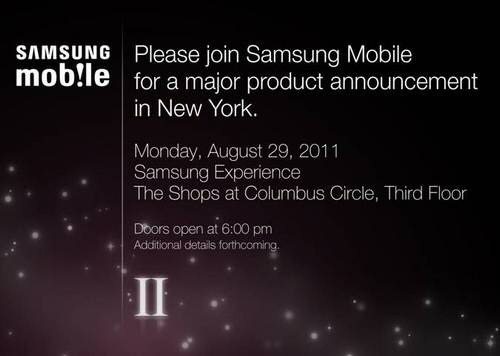