Despite the Samsung Galaxy Tab 10.1 being banned from being offered in virtually the entire EU due to Apple getting an injunction, there remains one country that Samsung can still launch their Android slate in, the Netherlands, and old Sammy is going to do so as of today.

According to an article over on The Independent, Samsung spokesperson, Tamara Villani, has said, “The Galaxy Tab 10.1 will be on sale from Tuesday” in a large electronics chain around the country,” and also added that the Android 3.1 Honeycomb tablet will also be available in various other stores as of the 23rd of this month.

The reason Samsung can release the Samsung Galaxy Tab 10.1 in the Netherlands is because Apple has filed a separate suit against the company in that country thus the EU injunction doesn’t cover the Netherlands.

Last week Apple asked a Dutch judge to ban the sale of 3 Samsung smartphones along with the Samsung tablets accusing Sammy of infringing on Apple’s design patents, and the papers were files in the Hague district court on the 27th of June.

Villani, apparently couldn’t comment on how the outcome of the case would affect sales in the Netherlands but did say, “Whatever the decision, we can continue our business as planned until October 13,” the 13th of Oct being the date Samsung would have to remove their gear from shelves if an injunction is granted.

Of course if the rest of Europe is anything to go by then it would appear that Apple will get their injunction in the Netherlands as well, and as you probably know, Samsung has stated they will appeal against any injunctions, but appeals take time and during that time Samsung will not be allowed to offer their slate to the public.

Thus it looks like Apple is getting their own way when it comes to the Samsung Galaxy Tab 10.1 and basically strangling any attempt at Samsung offering the device to their customers, which although might be a good thing for Apple isn’t good for Samsung and customers in general because who knows where all this will end, and who Apple will go after next. 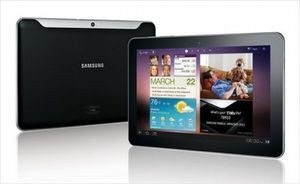