The other day we brought you the news that the Sony Tablet S was up for pre-order in the UK along with its pricing, but at that time it wasn’t know if or when the Android 3.1 Honeycomb slate would be available in the USA, however we now have that all-important info for those over in the US who might be considering picking up the Sony Tablet S, a device that used to be known as the Sony S1

According to the guys over at Phone Arena, Sony is now taking pre-orders for the Sony Tablet S in the good old US of A over on the Sony website, with a general release date set for the 16th of this month.

So if you are thinking of snapping up the new Android slate here’s what you can expect spec wise, a 9.4-inch TruBlack touch screen, again with an NVIDIA Tegre 2 dual core processor, front and rear facing HD cameras, and microSD slot, and Android 3.1 Honeycomb OS.

For those that might be interested in the Sony Tablet P, formally known as the Sony S 2, currently the device isn’t up for pre-order and there is no pricing available at this time, but you can enter your email address to be notified when the device becomes available.

So there it is, those that might be considering snapping up the Android slate from Sony should be able to get their hands on the tablet as of the 16th, which isn’t too far away; any of our readers hoping to purchase this tablet? 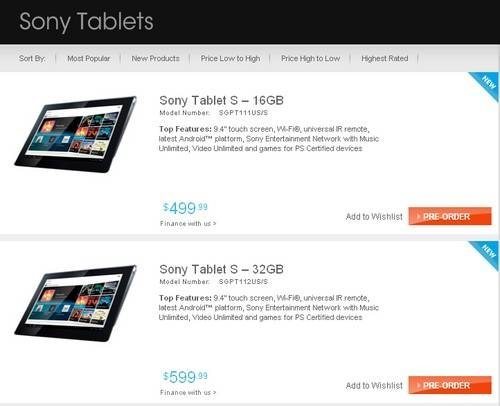 4 thoughts on “Sony Tablet S US Release Date and Pricing”