The Motorola Droid Bionic unboxing video comes our way courtesy of the guys over at Phone Arena who have just got hold of the long awaited Android handset and goes through the motions of unwrapping the beast in this just over seven minute video.

If you don’t know the specs for the Droid Bionic by now you must have been living in a cave without access to the mobile world, but as a reminder here’s the main specs…Android 2.3.4 Gingerbread OS, 4G LTE connectivity, 4.3-inch qHD touch screen, 8 megpaixel camera, VGA front facing camera, 1080p video, 1GHz processor, 1GB RAM, 16GB memory and microSD expansion up to 32GB.

The Droid Bionic is the thinnest of the four 4G LTE capable smartphones on the Verizon network at 11mm thick as its thinnest point, and as the device is mostly plastic it is quite lightweight.

Price wise if you are expecting to snap up the Motorola Droid Bionic on release, the handset will set you back 300 bucks when signing up for a two-year agreement with the Big Red.

So there you have it, I’ll stop right there and let you head on down to mash that play button and feast your eyes on the unboxing of the Motorola Droid Bionic…enjoy. 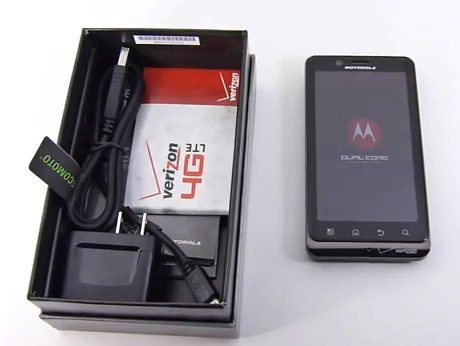