October draws closer and with it comes the expected release of the next generation iPhone judging by all the recent rumours, and one of those rumours is that Sprint will finally offer the iOS smartphone in the form of the iPhone 5 and or possible a lover priced model.

According to an article over on Sprint Feed, Sprint is definitely gearing up for an event of some kind in the first two weeks of October, as they have managed to get hold of a Sprint internal document that states…

“Due to the possibility of a major phone launch in October we are blacking out September 30th through October 15th.”

In case you are unsure what a “blackout” means, basically it means Sprint isn’t allowing any time off requests by their staff for that specific period, and let’s face it, advance employee time off request refusals usually precede the launch of the iPhone, we’ve all seen it happen before.

Of course all this ties in nicely with the rumours that have been floating round that Apple intends to release the next generation iPhone in the first two weeks of October, although naturally no one is confirming anything, but it does look like everything is pointing towards the release as being early Oct. 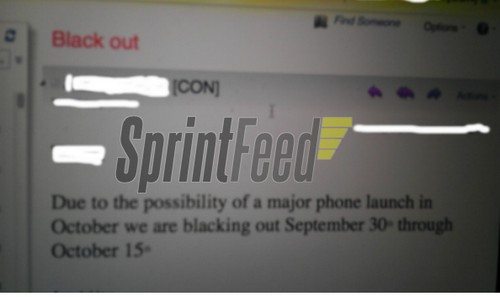 One thought on “iPhone 5 For Sprint: First 2 Weeks Oct Blackout”