Phones Review Quickie: As you probably know, several rumours in the past have suggested that Apple may be planning to deliver not one but two new iOS smartphones, obviously the iPhone 5 which has been grabbing practically all the attention, and of course the device known as the iPhone 4S, which is supposed to be a less expensive model.

Well according to an article over on 9to5 Mac the guys over at Engadget have somehow managed to get their hands on an AT&T internal system screenshot that lists along with already existing iPhone handsets, the iPhone 4S in white.

Other than that the document doesn’t offer anything else, but one could presume that if the screenshot is spot on we cane expect the iPhone 4S to come out to play in both black and white, possibly at the same time’ also of note is that the “S” isn’t capitalised.

The less expensive iPhone 4S if that’s what it turns out to be called is said to only be a minor refresh of the iPhone 4 with lower specifications, but like with all things Apple nothing has yet been confirmed and will remain so until such times as Apple sees fit to let the mobile world know.

So we’d like to know from our readers if the iPhone 4S captures their attention or is that attention firmly set on the iPhone 5, feel free to share your option to our comments area below. 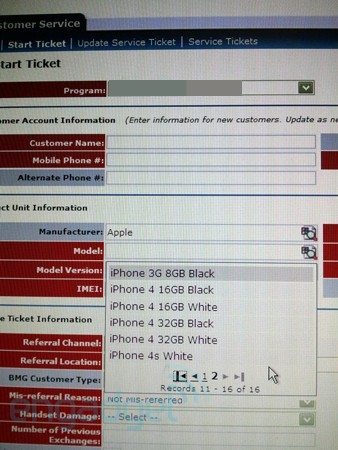