As most Android and HP TouchPad owners probably know, there is an ongoing attempt to port Android to the HP TouchPad tablet, and thus far apparently both cores of the 1.5GHz processor and hardware graphic acceleration is working, and now 3D gaming works as well, and we have a demo video of that for your viewing consideration below.

The HP TouchPad with 3D gaming demo video comes our way courtesy of the guys over at Slash Gear and by way of the CyanogenMod team, and delivers a nice little seven minute looks at the slate running a couple of 3D games along with HQ YouTube clips and 720p HD local video.

Furthermore they have also had some success with getting the HP TouchPad Beats Audio speakers working, along with the accelerometer and WiFi and we already know multi-touch work on the HP TouchPad with Android.

There is of course still a way to go and some things still do not work such as the camera, Bluetooth, the gyroscope, the compass, battery reporting, and video playback via overlay, and as we already know the CyanogenMod team will not push out a ROM until it is ready for the public.

The couple of 3D games seen in action on the HP TouchPad in the video are Homerun Battle 3D and Dungeon Defenders, and both games look o run pretty well while that 720p video and YouTube clips also work reasonably well.

Apparently the goal the CyanogenMod team is after is for the HP TouchPad to be able to dual booth into either webOS or Android, so for those waiting to grab a taste of Android on their HP TouchPad it will come eventually.

So with that said I’ll let you head on down to mash that play button and check out the 3D gaming demo footage, and feel free to let us know what you think by dropping us a line to our comments area below…enjoy. 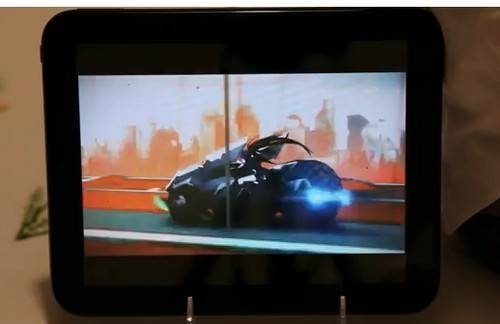