Phones Review Quickie: Karbonn Mobile has just launched its first Android smartphone; the device is called the Karbonn A1 and comes with the Android 2.2 Froyo operating system, as well as a 600 MHz processor.

Some of the apps the Karbonn A1 supports are the Google Map and G-Sensor as well as the ability to download many more apps via the Android Market. The A1 also comes with an 1100 mAh battery and a very cheap price tag.

You can purchase the Karbonn A1 Android smartphone in India for Rs. 6,999 (Around Â£93 GBP) according to Tech Know Bits.

Are you willing to purchase the Karbonn A1 Android smartphone that is only running Android 2.2 Froyo operating system, we cannot see this handset getting the Gingerbread update, we may be wrong who knows.

Please do let us know what you think of this new mobile phone, thank you so much. 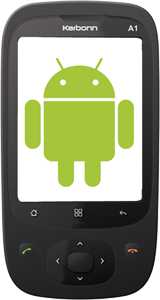