Apparently there has been no official word on why the Android Honeycomb slate has been removed, it could be they have run out of stock and can’t replenish, as imports are no longer allowed, but for what it’s worth, those in Germany who wish to own the Galaxy Tab 8.9 will for the time being at least have to wait.

Of course there is a possibility that Amazon Germany or Samsung Germany pulled the slate because they are expecting Apple to win a ban on the smaller tablet sometime soon, of course that is just speculation.

However recent rumour has it that old Sammy isn’t going to take Apple’s bullying lying down as the latest word is Samsung is gearing up to seek a ban of Apple’s thus far unreleased next generation smartphone the iPhone 5 in retaliation, in Korean and possibly Europe, although whether Samsung has a case against the iPhone 5 remains to be seen. 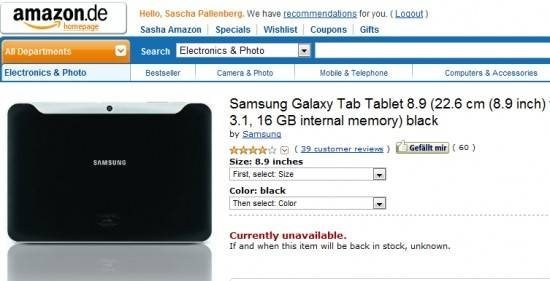