I know the iOS faithful will still cry its due to there only being one Apple smartphone, but that is by the by and not the point, the point is that Android still rules the roost in the United States when it comes to OS market share, and in fact is double that of the iOS platform.

According to the guys over on the Boy Genius Report, Millenial Media has posted their findings for August and shows that the Android platform still commands the United States smartphone market with a nice 54 percent of the impressions on their advertising network.

Apparently Android did drop from 61 percent back in July, but the iOS platform is the closest of the rivals coming in at 28 percent, which is up 7 percent from the previous month.

The top smartphone maker in August are Apple with 23.19 percent followed by HTC with 16.33 percent while Samsung comes in third with 14.55 percent and Motorola next with 11.37 percent, and then comes Research In Motion with 11.06 percent.

When it comes to top smartphones in August well obviously the iPhone maintains their number one slot with 13.06 percent followed by the LG Optimus with 6.71 percent, then the Motorola Droid with 6.12 percent, fourth is the HTC Desire with 4.78 percent and fifth goes to the BlackBerry Curve with 4.62 percent.

Out of the top twenty smartphones in the US 15 are Android smartphone, and 4 are BlackBerry smartphones and of course the iPhone sitting in that top slot, a place no doubt Apple will continue to hold for a long time yet. 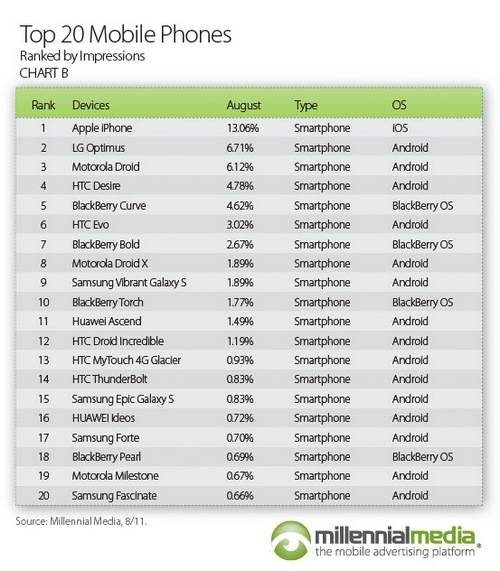