The Google Nexus Prime aka Samsung GT-I9250 has just been Bluetooth certified, and we all know that once a smartphone has got its Bluetooth certification it is at its last step before release.

Next up will be the FCC certification and then the official release date via the manufacturer, the Google Nexus Prime will be release with the new Google Android Ice Cream Sandwich operating system. Roll on November 3rd; we say this because this is the expected release date to the public.

Some have said that this smartphone will not be called the Nexus Prime but will be called the Galaxy Nexus, time will tell and of course we will let you know as soon as we know more.

Apparently another feature the Nexus Prime (Samsung GT-I9250) might get is a QWERTY keyboard, all specifications and features are all hear say at the moment. Please be patient until we know more about this much wanting mobile phone.

We will give you more details very soon, please stay with us for instant updates, why not join us on Facebook, Twitter or Google+ where you will be notified of up-to-date news. 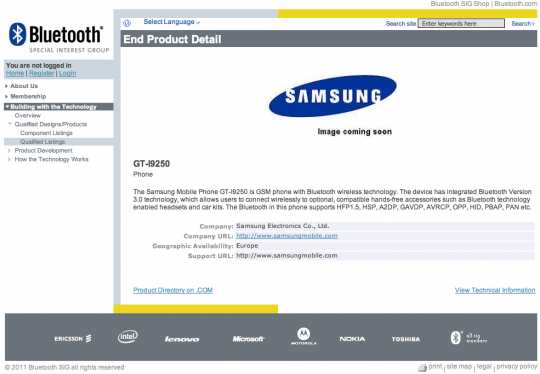