Phones Review Quickie: There’s a new Android smartphone making its way to the United Kingdom from the HTC camp, a Gingerbread handset that will have a fairly reasonable unlocked price, of course that Android smartphone is the new HTC Explorer that was officially announced at the end of last month.

According to an article over on Unwired View, the guys over at Clove are saying the HTC Explorer is due to hit UK shores as of the 31st of this month, so on Halloween, and they have the device priced at Â£192 that’s roughly $297, unlocked.

For those that don’t want to purchase the HTC Explorer as an unlocked device apparently both Vodafone and Three will offer the Android handset in the UK on contract although just when it will become available on contact and at what price remains unknown at this time.

So there you have it just a quickie to let you know if you are in the market for an unlocked HTC Explorer you should be able to pick it up soon if all goes according to plan, if not then wait for the carriers to offer the device no doubt for free on contract.

Are any of out UK readers hoping to pick up the HTC Explorer at some point? If you have enjoyed this Phones Review article feel free to add me your circles on Google+ and I will of course add you back. 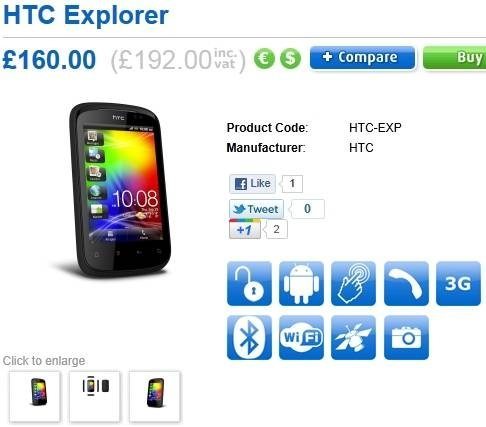