It appears that old Samsung is now taking the fight to Apple by way of making a comparison between Apple’s newly unveiled iPhone 4S and the Samsung Galaxy S II and releasing to the tech world a graphic of the comparison only 24 hours after Apple’s announcement.

According to the guys over at Slash Gear, the graphic shows a true comparison between the two smartphone with the Android smartphone making it quite clear that their Samsung Galaxy S II is in the lead over the iOS smartphone in more than a couple of points and that the iPhone 4S does indeed lag behind.

The differences between the two rival handsets kick off with the dual core processor, which come out roughly the same, while when it comes to network, Samsung is quick to point out that the Samsung Galaxy S II is a 4G device while the iPhone 4S is 3G.

Screen size is again a big winner for Samsung with the Galaxy S II packing 4.3 or 4.5-inch while the iPhone 4S retains that 3.5-inch, and something the iOS faithful were hoping was going to change with the next generation device, although when it comes to display resolution it goes the 4S way with its Retina Display and 960 x 640 as opposed to 800 x 480 on the Galaxy S II.

Cameras on both devices come out roughly the same, as does 1080p video although Sammy does stipulate theirs is “high profile.” Weight wise the Galaxy S II is the winner again weighing 4.3 ounces while the iPhone 4S weighs 4.9 ounces.

All in all I figure Samsung is basically trying to point out that the Samsung Galaxy S II when compared to the iPhone 4S gives more to the potential customer, and probably goes a little way to help Samsung in the continuing legal battle between the two smartphone giants. 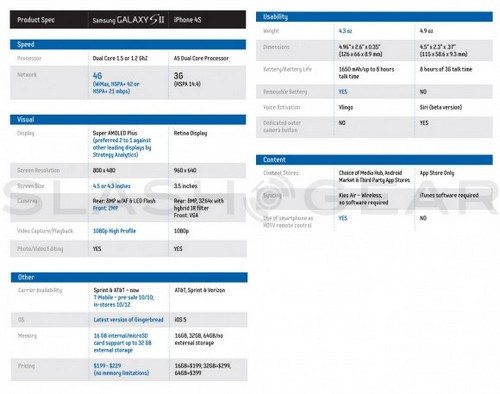