The Facebook for iPad review video comes our way courtesy of the guys over at Slash Gear who went hands-on with the new app in this just over six minute look at the new application for the iOS tablet.

The guys do say that the Facebook for iPad app is “pretty much okay,” but it certainly isn’t the nicest interface for tablets they have come across but apparently ranks amongst the “top looks at Facebook.”

The guys go on to say that Facebook has tried to replicate browser based abilities across the board of course without video chat and games and end up delivering nice location based and gallery interfaces. You can see that the app has been clearly made for tablets with the ability to switch from portrait to landscape and when in landscape the user can see their chat.

Visually the Facebook for iPad app is very similar to what you’d see on your regular Facebook look and Facebook for iPad enables the user to look at images like a real album although in the video it appears one has to go through the tour when trying to post an image, but hopefully this doesn’t happen every time.

You can also use Facebook check-in right from the Facebook for iPad app, update feeds, search Facebook, who’s nearby, and of course check out profiles, so basically everything you can do on Facebook you can do on your Apple iPad with the app.

I’ll leave it right there so you can head on down to hit that play button and check out the Facebook for iPad app for yourself, and no doubt if you haven’t yet grabbed the app you will do so soon…enjoy. 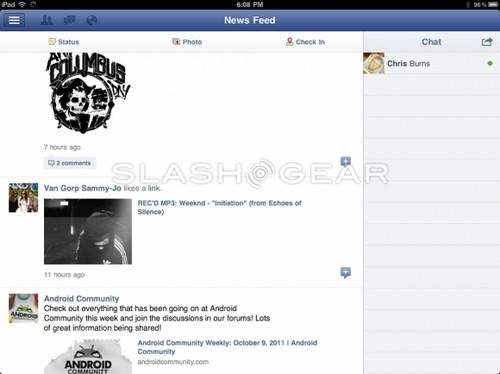