This has got to be a fake time, we say this because the Samsung Galaxy S III specs have been leaked online thanks to an image. The snapshot shown below gives some amazing features to the Samsung smartphone, if these are to be true then this will most definitely be the handset to have.

If you look at the image below it claims that the Samsung Galaxy S III will feature 2GB of RAM, dual-core 1.8GHz Exynos 4212 processor, 4.6-inch Super AMOLED Plus HD display, 12MP camera, but we cannot take these specs as real just yet, nothing is solid until official announcements by Samsung, event coming soon.

It is very hard to say if this is real, the image is a little fuzzy so could be photoshopped. Can you really see Samsung calling these displays on the Samsung Galaxy S III “Super AMOLED Plus HD” it is more likely to see Samsung naming it HD Super AMOLED.

The handset is more than likely to feature NFC and LTE according to Phandroid, and the SGS3 will not have the curved design, but it will be thinner than the SGS2, it will also be released with Android’s upcoming Ice Cream Sandwich.

Please do not take the above to heart, it is all speculation and it will all be revealed at very soon. Stay with us at Phones Review because we will reveal all very soon, as soon as we know more so will you.

Please join Phones Review on Facebook and Twitter; you can also connect with me Mark Chubb via Google+ 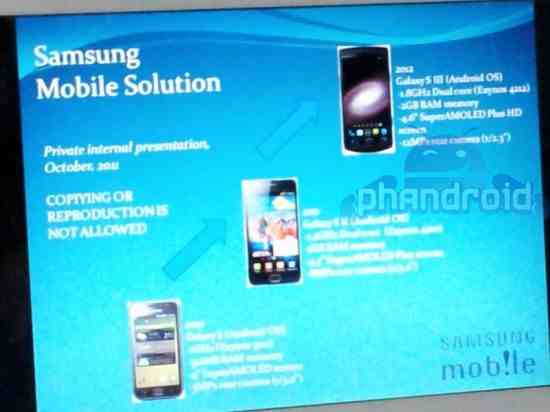