Galaxy S II Offered for $2 against iPhone 4S in Sydney

Down under in Sydney Australia the iPhone 4S goes on sale as of Friday and is already attracting long queues of people who wish to be one of the first to get the new iOS smartphone, but Apple rival Samsung who have set up shop a couple of doors down are seeing even longer queues for the Samsung Galaxy S II.

There’s a reason the Samsung store is seeing longer lines than the Apple store though, as according to an article on The Sydney Morning Herald, old Samsung is using an offer to distract from the launch of the iPhone 4S by offering the first 10 people through the door every day a Samsung Galaxy S II for a staggeringly low 2 bucks.

Mosca’s friend Wil Hoxton said that he believes a lot of people will get the iPhone 4S because it is the last iPhone that Steve worked with, and people are saying it was named after him “like the iPhone for Steve.”

However a few doors down outside the Samsung pop-up store, one guy waiting, Jason Marriott, (no relation) says, two bucks for a $800 phone is pretty amazing, because he believes it is the best phone out on the market at the moment, so to get it for $2 is a ridiculous deal.

And I have to admit, $2 for the Samsung Galaxy S II has got to be an attraction worth waiting in line for, don’t you think? 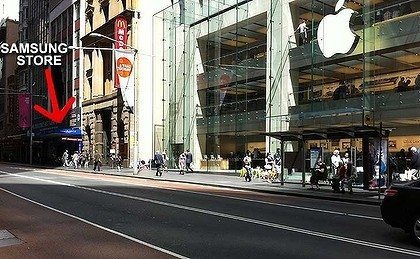