The big buzz in the Android world is of course the Samsung Galaxy Nexus, and the latest Android operating system from the Google guys, Android 4.0 Ice Cream Sandwich, an OS that brings numerous new features to the Android platform such as a new look user interface, Face Unlock, Android Beam and a whole bunch of others. So what we have for your viewing consideration below is an Android Ice Cream sandwich hands-on video.

The Ice Cream Sandwich walkthrough footage comes out way courtesy of the guys over at Slash Gear who were in attendance at the Hong Kong event and got to play with the Samsung Galaxy Nexus and Android Ice Cream Sandwich.

The footage lasts almost eight minutes of checking out Android 4.0 on the much talked about Galaxy Nexus, but if you prefer an in-depth written appraisal of the operating system you can hit up Slash Gear, but if you don’t have time for that you can simply check out the video below.

The guys show off some of the features of Android Ice Cream Sandwich starting off with real time voice dictation in text messaging, which basically types out whatever you say, seems like a very neat feature to me.

Next up are the camera and the panorama mode and then moves onto video recording, which they say is “super clear.” When it comes to the gallery there is now a “magazine” style that takes up the whole page.

Anyway I don’t wish to spoilt your viewing of the Android 4.0 features video, so I’ll stop right there and let you head on down to mash that play button and check out the latest Android operating system for yourself, but do feel free to let us know your opinions on the OS by dropping us a comment below…enjoy. 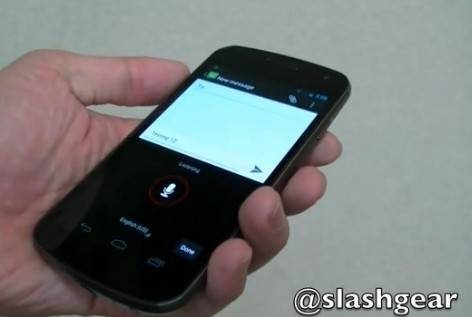