Looks like Nokia is heading its way back into the smartphone game, never count a mobile firm out until they are gone. They are releasing a number of smartphones and one that will look into the future is the Nokia Kinect phone with a flexible display. Can this future phone bring true smartphone competition to life?

Today we have reported a lot of news about Nokia and their upcoming smartphones, such as the Nokia Lumia 800, Lumia 710 and a bunch of Asha S40 smartphones, but the one that interests us is the Nokia Kinetic that Phones Review James reported on earlier today.

We are mentioning this future handset again because there is so much competition out there, such as the iPhone 4S, upcoming iPhone 5, Samsung Galaxy Nexus, the Motorola Droid Razr and so many more. Up until now Nokia has not stood a chance is competing against these smartphones, well we believe that will all change when the Nokia Kinetic is released.

It is brilliant that the Kinetic has a flexible screen and a twisted interface, the one you see in the picture and video below is a prototype. Not only can it bend, but also the twisting motion controls the interface, so if you bend the screen forwards it will zoom in, and bend out to zoom out and so forth.

A flexible AMOLED display with functions controlled by bending and twisting, this will surely be better than any iOS and Android device by far, what do you think?

Please visit Engadget and check out their photo gallery of the Nokia Kinetic future smartphone. 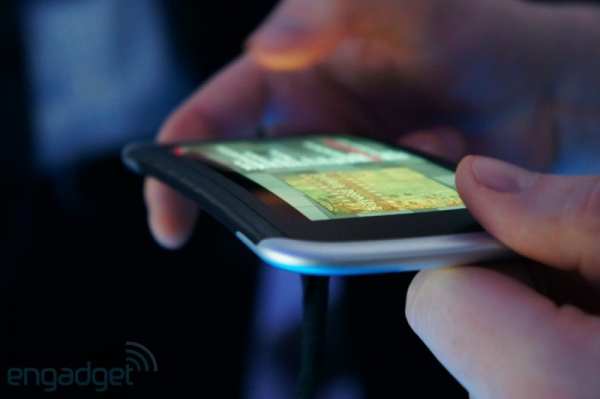 4 thoughts on “Can the Nokia Kinetic bring true smartphone competition”