The new Nokia Lumia 800 is coming to Vodafone UK, and is now featured on its official website as coming soon. This smartphone is the first for Nokia to be powered by the Windows Phone operating system, and will be launching in November.

Earlier on today Phones review colleague James reported news about the new Nokia Lumia 710 showing a few details and videos, then he reported on the official specs for the Nokia Lumia 800, check these specifications out here.

This is Nokia’s next installment to the smartphone user, we already know that the Nokia Asha 200, Asha 201, Asha 300 and Asha 303 devices are coming soon also, please read more about this here. But for now let’s concentrate on the new Nokia Lumia 800 Windows Phone coming to Vodafone UK.

Some of the main features on the Nokia Lumia 800 include a 1.4Ghz processor, Windows Phone Mango operating system, 3.7-inch ClearBlack AMOLED curved touch screen, 16GB onboard storage, f/2.2 Carl Zeiss lens, rear camera but not to sure on megapixel, it will also come with many mobile apps such as ESPN Sports hub, turn-by-turn voice navigation via Nokia Drive and Nokia Music.

It will record and shoot in HD, Zune for music will be included as well as Xbox LIVE for gaming, and SkyDrive for online storage with 25GB of capacity available as standard.

Vodafone is offering customers the “Data Test Drive”, basically this means pay monthly customers can use as much data as they like for three months, this means that they can explore the Nokia Lumia 800 with no extra data usage worries.

For more information, please register your interest for the Nokia Lumia 800 via Vodafone UK. 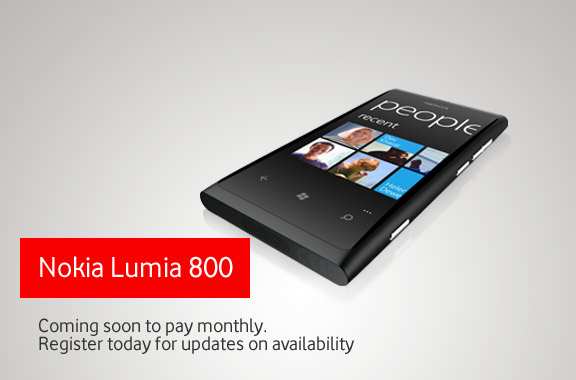