The other day we reported that manufacturers were finding it somewhat challenging to deliver a Retina-like display for the next generation iPad, the Apple iPad 3; however according to the laest report that are some major obstacles that have to be overcome before an iOS slate could have the same quality display as the iPhone 4S.

According to an article over on Ubergizmo by way of Extreme Tech, the Retina Display has a pixel density so high that the naked eye can’t distinguish between individual pixels on the screen, however according to Morre’s theory…” a chip or display will double its transistor count, and thus power or resolution, every 18 months, you get a curve of innovation based on production costs that has held true since 1975.”

Apparently this “Moore’s theory” means that production costs will fall drastically as makers become better at assembly line processes and thus chop down on waste when flaws show up and the amount of pixels per inch will increase as the industry becomes smarter.

So basically what is being said is that when it comes to the Apple iPad 3, apparently it isn’t cost effective to deliver a 10-inch iPad display with the resolution Apple is asking for, so although it is possible it wont happen due to cost.

Apparently the Retina-like tablet display wont arrive until at least 2013, so we are probably looking at the Apple iPad 4 before seeing that tablet Retina Display, although I figure anything is possible and who knows Apple just might get what they want as they always seem to in the past.

So the big question here is, would the Apple iPad 3 not having a “Retina Display” screen stop you from purchasing the tablet, or doesn’t it make a great deal of difference to you either way? Fell fre to let us know your views by posting to our comments area below. 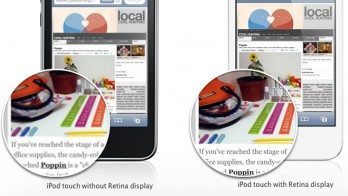