The frenzied time of the year is quickly approaching, a time that signals the Christmas shopping season starting over in the good old US of A, Black Friday 2011, and recently my colleague Mark posted an article claiming that the first Android Ice Cream Sandwich smartphone, the Samsung Galaxy Nexus may not launch on the Big Red until just after Black Friday; however a recent Verizon product launch roadmap says otherwise.

According to an article over on Phone Arena by way of Droid-life, potential Samsung Galaxy Nexus owners just might be able to hit up Verizon prior to Black Friday, as according to said Verizon product launch roadmap it looks like the Galaxy Nexus will beat that November 25 Black Friday date.

The Big Red roadmap shows that the Motorola Droid RAZR will launch as of the 11th of this month whilst the HTC Rezound will see the light of day as of the 14th of Nov, whilst on the 17th of the month the Samsung Illusion and BlackBerry Curve 9370 are set to launch.

So what about that all-important Samsung Galaxy Nexus, well according to the roadmap old Verizon has scheduled the Android smartphone to come out to play the 21st of November, which is of course before the 25th Black Friday 2011, but online only.

Verizon dropping the Samsung Galaxy Nexus prior to Black Friday 2011 would at least mean the first Android Ice Cream Sandwich smartphone will be available during that frenzied holiday buying season for those that wish to purchase the device.

The Big Red roadmap also shows that the two versions of the Motorola Xoom 2 will also be launching on Wednesday the 30th of November just in case anyone wishes to pick up one of those Xoom tablets before Christmas. 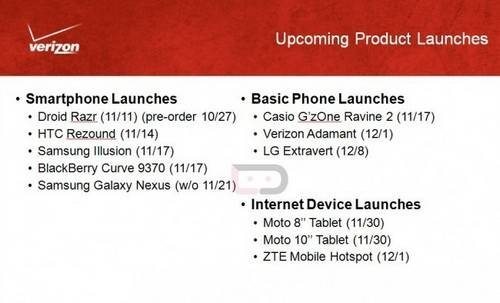