The iPhone 4S goes up for grabs in Hong Kong as of Friday, and as with all things Apple, it has seen long lines of hopefuls queuing to snap up the latest iOS device, with some approximately 400 people queuing; however things got out of hand last night and police intervened.

According to an article over on MIC Gadgets, at roughly 7/8pm yesterday police officers moved in and evacuated the crowd because according to a witness a dispute flared between Hong Kongers and South Asian queuers, where apparently 2 Hong Kongers were warned by a South Asian guy to leave the queue otherwise he would call in hundreds of South Asian men to chase them away.

Apparently the guy was believed to be the head of the gang of South Asian, apparently some where frightened by the threat and thus called in the cops, and when they arrived the South Asian guy disappeared only to reappear once the cops had gone.

The altercation happened outside the Hong Kong IFC Apple Store, and aside from the altercation it has been reported that one person had an epileptic fit whilst queuing for the iOS smartphone in the afternoon.

Anyway, we have a couple of video’s of the queuing for the iPhone 4S in Hong Kong for your viewing consideration below, the first if from YouTube user Penguinsix, showing a reasonably calm but extremely long queue, and the other from MIC Gadgets showing the cops moving the people along.

In an update MIC Gadget reports that 3000 people turned up at the Hong Kong store, with Apple only allowing 1250 people to queue. 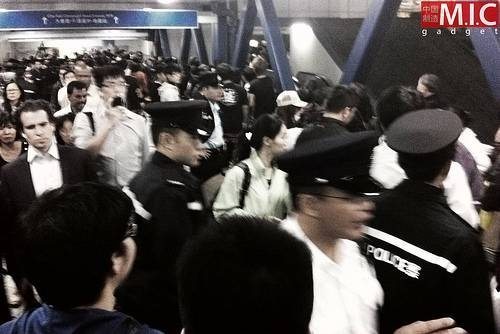