The Samsung Galaxy S II recently released on the AT&T network as the Skyrocket, and if you have been sitting on the fence pondering on whether to pick up the Android smartphone from AT&T perhaps a nice in-depth review video of the Samsung Galaxy S II Skyrocket might help you may your decision, so that’s what we have for your viewing pleasure below.

The Samsung Galaxy S II Skyrocket for AT&T review video comes our way courtesy of the guys over at Phone Arena who have also done a lengthy in-depth written review article over on their website that covers four pages, but if you don’t have the time for that full on written review you can simply check out the footage below.

As you will note, the Skyrocket is sporting the larger touch screen than other GS II handsets and the Skyrocket packs 4G LTE but still remains a nice 0.37-inches thick, and still generally maintains the Galaxy S II design overall.

You’’ also probably be aware that AT&T also dropped the price of both the Samsung Galaxy S II Skyrocket and HTC Vivid recently, with both Android smartphones seeing a 100 buck price cut as we reported previously.

Anyway, I’ll leave it right there to let you head on down and check out that video review of the AT&T Samsung Galaxy S II Skyrocket, and feel free to let us know if the footage helps you make that decision to purchase or not…enjoy. 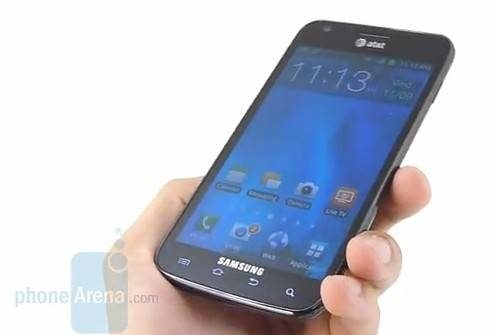