It’s seems to be turning into a bit of a will it, won’t it scenario with the Samsung Galaxy Nexus for Verizon, as yesterday we reported that it appeared that the Big Red version of the Android Ice Cream Sandwich handset would be surfacing with just 16GB of storage due to the 32GB version vanishing from the Galaxy Nexus tech spec page.

However, according to an article over on Phones Arena by way of the guys over at Droid-life, the 32GB version of the LTE enabled Samsung Galaxy Nexus may not have been killed off by the Big Red after all.

The guys have come up with an image of a training doc (below) from Verizon that shows off a comparison between the US carrier’s top three LTE devices against two from rival AT&T and the three Verizon handsets are the Motorola Droid RAZR, HTC Rezound and the aforementioned Samsung Galaxy Nexus.

And this is where the 32GB Galaxy Nexus pops back into the game as the listing does show that the smartphone will have 32GB of internal storage, which leads to some confusion as to which is correct and begs the question why has the Galaxy Nexus tech spec page dropped the 32GB reference?

However adding to the confusion, the Phone Arena guys say that the device image in this Verizon training document looks like the Samsung Galaxy S II, which makes them believe that this document could be somewhat outdated.

So for now there is still a grey shadow over whether Verizon will actually release both a 16GB and 32GB LTE enabled Samsung Galaxy Nexus. 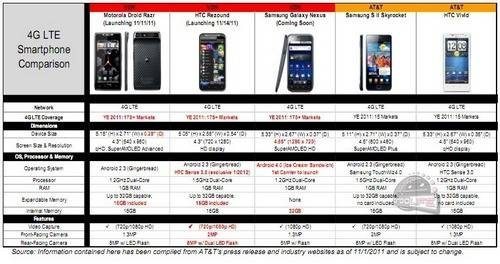