We all know that since Apple delivered their first iOS slate, the Apple iPad has been dominant in the tablet space, however it appears that the new Amazon Kindle Fire could prove to be a bit of a challenger to Apple’s tablet dominance and in the tablet popularity stakes according to recent figures.

According to the guys over at iDownload Blog, new figures from ChangeWave Research has it that the Android packing Kindle Fire from Amazon is the second most popular tablet at the moment sitting just behind the Apple iPad.

Apparently a survey taking in some 3043 people conducted this month of which 22 percent said that they had plans to purchase the Amazon Kindle Fire, however when it comes to the Apple iPad a whopping 65 percent said the iOS slate is their preferred choice.

When the same people were asked about the Samsung Galaxy Tab the Android slate only managed to pull in 4 percent of those asked.

Naturally people saying they intend to buy a certain tablet doesn’t actually mean that they will, and as we know, any new tablet has quite a fight on its hands to challenge the likes of the Apple iPad 2, but eventually as with all things a new tablet will come out to play that will defeat the iPad, when that will happen is anyone’s guess but it will happen at some point.

So we’d like to ask our readership which tablet they prefer, or if you already own an iPad, which tablet would you opt for if the iPad never existed, feel free to give your opinion by posting to our comments area below. 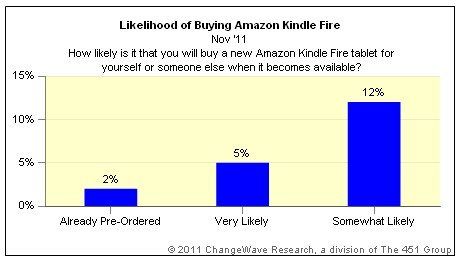