You might be aware that there’s a bit to a hoo-har going on over Carrier IQ due to the software being pre-installed on mobile devices and collecting mobile data for makers and operators to analyse so that can apparently make service, hardware and network improvements, and we recently posted an article of the major players involvement in the Carrier IQ shenanigans, which can be read (here).

Now according to an article over on Crackberry, it appears that Research In Motion says they do not install Carrier IQ on their devices and that carriers shouldn’t do so either. However it appears that T-Mobile hasn’t heeded RIM’s suggestion.

Apparently T-Mobile has installed Carrier IQ on the BlackBerry Bold 9900, BlackBerry Torch 9810 and the BlackBerry Curve 9360, and T-Mobile claims that it doesn’t track personal data rather it tracks app failures, dropped calls and battery performance.

However Crackberry does note that if you are a T-Mobile user as long as the user never used the My Account app and doesn’t signify agreeing to the T&C’s along with accepting the permissions, the Carrier IQ shouldn’t run on your T-Mobile BlackBerry handset.

In the meantime the guys are looking into finding out how to possibly remove the Carrie IQ app from a device but it isn’t as simple as switching off a T-Mobile OS to another and once they have more info on that matter they will pass it along. 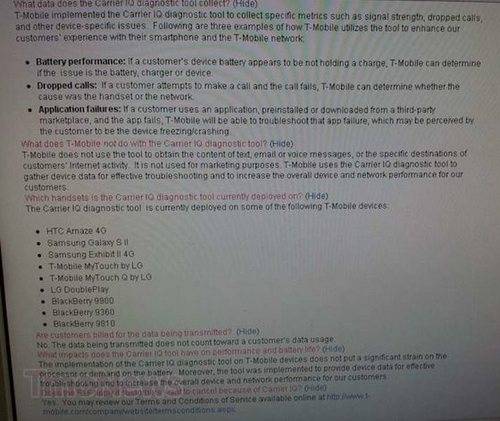