The Android faithful over in the USA who have been hanging on for the Big Red to release the first Android Ice Cream Sandwich handset can now rejoice because Verizon has finally got their finger out and released the US version of the Samsung Galaxy Nexus for purchase ending the long delay.

Yes people, according to the guys over at Android Police the Big Red went live with the Samsung Galaxy Nexus earlier today thus making the much delayed Verizon Galaxy Nexus available to customers.

Those that wish to grab theSamsung Galaxy Nexus from Verizon Wireless; the device will set you back some $299.99 when signing on for the usual two-year period with free overnight shipping. However if you wish to forgo that commitment you can get the Galaxy Nexus for $649.99.

However, Verizon isn’t the only place you can pick up the Android 4.0 packing smartphone, as Wirefly has also gone live with the device and offing it for 220-bucks with a new agreement or for 250-bucks as an upgrade.

So there you have it, after some considerable time you can now own the Samsung Galaxy Nexus over in the good old US of A, will you be grabbing the Galaxy Nexus today? 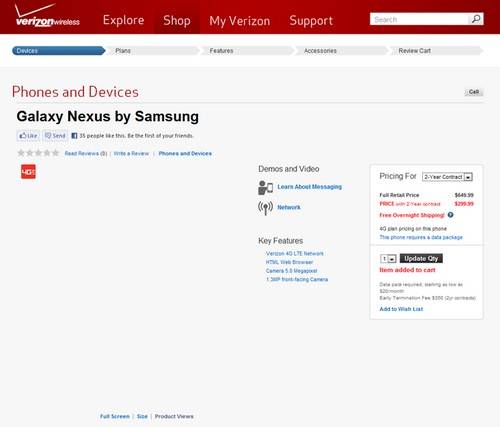