When it comes to the mobile space its all about what platform or maker will dominate during the year, and apparently in 2012 both Amazon and Microsoft will be making big waves in the mobile arena with Nokia bring up third place according to a recent survey called 2012 Mobile Industry Predictions.

According to an article over on Xconomy, a new survey from Chetan Sharma that polled 150 people via their global mailing list of industry insiders, Amazon’s entry into the mobile arena comes in second with Microsoft and Nokia coming third.

The top slot in the survey went to continued growth of mobile data globally, with fourth place going to marketing battles and 4G deployment, Google and Android comes fifth followed by security and privacy and then strangely enough in seventh place is Apple tablets and the iPhone.

Apparently Sharma says that moving into tablets and possibly smartphones is only part of Amazon growing to become a “super-retailer for everything.”

When it comes to Microsoft their mobile future relies heavily on their Windows Phone partner, Nokia with the stakes being higher for Nokia than Microsoft because of their cash richness. However Sharma does say that the European uptake of Nokia’s Windows Phone devices such as the Nokia Lumia 800 has been somewhat tepid and needs to garner a much better response in the USA.

The survey apparently asked respondents to take in 2-years, and as a result those respondents still saw both Android and Apple’s iOS commanding the market especially as Microsoft’s Windows for tablets isn’t ready for public consumption yet.

According to which will be the most dominant (unit sales) tablet platform in two years, iOS will hold 45 percent of the market closely followed by Android with 44 percent and Windows only garnering 8 percent with others taking up the 3 percent slack. 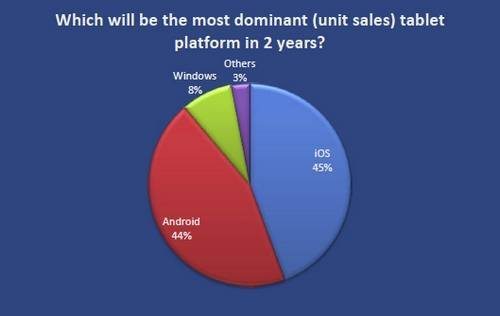