Welcome to new technology called GM Cue, there are many new vehicles and mobile technology products launching at the Detroit Auto Show 2012 and today we would like to bring your attention to the Cadillac ATS and its mobile integration.

GM Cue is basically a center hub system, which works a lot easier than the BMW iDrive system, in a nutshell the 2013 Cadillac ATS sedan comes fitted with CUE (Cadillac User Experience), the new Bluetooth system that pairs up to 10 mobile devices such as phones and tablets.

The user in the vehicle can customize the interface with their own voice commands, using fewer buttons. How can we make this sound simple? Well basically think about and iPad, iPhone or an Android device functionality for your car, the system is based on touchscreens, allowing the syncing of mobile devices using simple and not long winded paths. 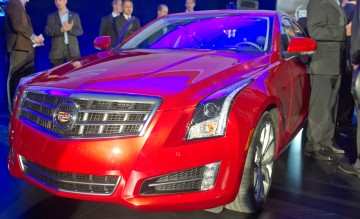 Once your device has been paired the driver or passenger can then slide apps around, open up the likes of Pandora, toggle through all this via the steering wheel of the vehicle.

The center panel can be customized, to break it down to understand, it is a landlocked tablet above your heating buttons according to Forbes.