There are a few high-end Android devices available on Verizon that make it somewhat difficult to make a choice, but usually for most it all comes down to price. Not too long ago the HTC Rezound became available on the Big Red for $299, but now Verizon has decided to give the Rezound a nice price drop.

According to the guys over at Droid-life by way of Verizon Wireless, the Big Red has now dropped the asking price for the Android Gingerbread smartphone by a cool 100-bucks and can now be purchased for $199 when signing up for that usual two-year agreement.

But why has the Big Red dropped the HTC Rezound price by $100 only after just tow months of being available? Well the Rezound was faced with a couple of compelling challengers in the form of the Motorola Droid RAZR and of course the first Android Ice Cream Sandwich smartphone to hit stateside, the Samsung Galaxy Nexus.

Both are of course 4G LTE capable handsets, although the Samsung Galaxy Nexus does offer the latest Android operating system whilst the HTC Rezound has to wait for an OS update to Android 4.0, but apparently if you recently purchased the HTC Rezound you can get that 100-bucks credited to your account as many have already done so.

So I figure with Verizon dropping the price on the HTC Rezound, it makes the handset somewhat of a more attractive option to the Samsung Galaxy Nexus, so those who are debating will need to make a hard decision on which device they should pick up.

So with this in mind, if any of our readers are considering purchasing one of the above devices from version, which will you decide to opt for, the Galaxy Nexus or the HTC Rezound? 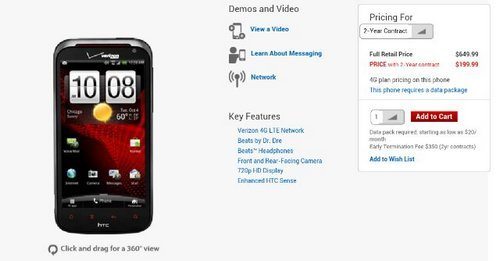