According to the guys over at Venture Beat, these two new accessories are wireless home audio devices that turn your home into an always on Android powered entertainment space, and is the first system of its kind to be optimised for Android.

The PlayCast Speaker is pyramid shaped and 8.36-inches long and 5.5-inches wide, and delivers music playback in a 360 degree radius, and can stream audio over WiFi from any Android device running Android 2.1 or above via the PlayCast Android app.

The PlayCast Speak is also a docking station for your Android tablet or smartphone and apparently multiple speakers can be linked together to either play different streams from several Android devices or, use together to deliver a multi-room listening experience.

The PlayCast Receiver unit is a smaller device coming in at only 1.2-inches high, and enables the users home audio set up for push button streaming over WiFi where music is streamed to the receiver through the PlayCast Android app and them delivered to your home system, speaker dock or boom box via an inline jack. 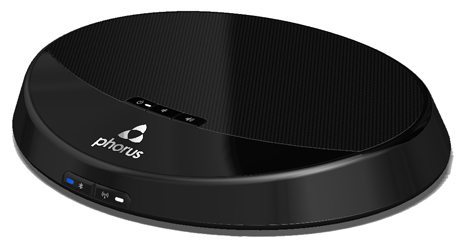 One thought on “Android Speaker Docks: Phorus PlayCast is the nuts”