Perhaps you are finding that iPhone keyboard a little cramped these days and would love a larger virtual keyboard for your beloved iOS smartphone, well during CES 2012, Korean manufacturer Celluon showed off a new case for the iPhone 4 and iPhone 4S called the Prodigy that gives the user a full sized virtual keyboard to use.

According to an article over on PC World, the guys over at Pocket-lint managed to get some hands on time with the Celluon Prodigy case for iPhone at the event and apparently works by shooting off a laser pattern of a standard QWERTY keyboard onto the surface in front of it and then tracks which keys you touch.

The info from the laser projected keyboard is then sent to your iPhone 4 or iPhone 4S via Bluetooth just like it would with a more traditional Bluetooth keyboard. Furthermore the Prodigy case for iPhone also features an extended battery along with a kickstand so you can prop your smartphone up like a little monitor.

However if you are an Android smartphone user and feel a tad left out of the laser projected keyboard stakes, then fear not because Celluon has your back covered as well with a device called the Magic Cube, which is a standalone device that connects to any Bluetooth enabled device so they too can use a virtual projected keyboard.

Back to the Prodigy case for the iPhone, the guys say the virtual keyboard works well as long as the user can type clearly, and doesn’t drag their fingers and apparently the rep says it doesn’t work too well on a mirrored or glass surface.

As for price, the Celluon Prodigy case for iPhone will command a price tag of 150 quid, roughly 230-bucks whilst the Magic Cube costs about Â£110, roughly $170. 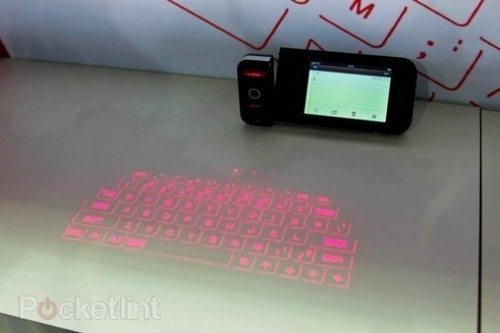