Let’s be quite honest here, when it comes to share price Apple is a firm that simply can do no wrong, as word is yesterday Apple’s share price hit the magical $500 mark, and obviously that is mainly due to Apple delivering devices such as the iPhone 4S that have proved to be a massive hit as with most things Apple.

According to the guys over at Ubergizmo by way of Money.cnn, only just 6 months ago Apple shares hit the $400 mark for the first time, and 16 months since the company’s shares surpassed the $300 mark and obviously due to the mass of the iOS faithful out there remaining loyal to the brand.

Apparently even the 28-year-old Macintosh range continues to drag in the cash and break new slaes records.

One has to consider that only 3-years ago Apple stock traded at just $78.20, so the company has moved forward in leaps and bounds when it comes to share price, and apparently that equates to a massive 539 percent stock rise in the passed 3-years, whilst Apple’s profits have leapt some 711percent in the same timeframe.

So with all his in mind, as you probably know the rumour is we will soon see the arrival of the Apple iPad 3, word has it the next generation iOS slate will surface in March, and of course everyone of the iOS faithful is expecting the release of the iPhone 5 later in the year.

So once both the Apple iPad 3 and iPhone 5 arrive in the public space do you think they will smash the current $500 shares mark and push Apple shares up even further? 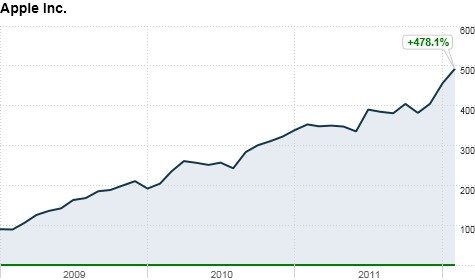