There definitely seems to be a trend for larger-screened smartphones at the moment, in fact some have been described as hybrid smartphone/tablets. We wanted to take a look at three of these latest smartphones to compare what they have to offer so read on for more on the LG Optimus 4X HD vs. LG Vu vs. Samsung Galaxy Note.

The Samsung Galaxy Note has already come out to play while LG has only recently announced the Optimus 4X HD and Optimus Vu handsets and news on release dates and regions on the latter two are not yet confirmed. Although personal preference will always come into your ultimate choice, let’s dissect what the three have to offer in a bid to help you decide which might be the handset for you. We’ll look at some of the key specs and features.

Starting with those whopping displays we can tell you that the Optimus 4X HD has a 4.7-inch True HD IPS display with resolution of 1280×720, the Vu has a 5-inch IPS LCD display with resolution of 1024×768 while the Galaxy Note has a 5.3-inch WXVGA HD Super AMOLED screen with resolution of 1280×800. On to the all-important processors and this is where there’s a real difference as the 4X HD features a 1.5GHz quad-core while the Vu has a 1.5GHz dual-core and the Galaxy Note also has a 1.5GHz dual-core chip. That makes the Optimus 4X HD the only one of the three to feature a quad-core chip and as more and more quad-core devices arrive that’s something you might want to take into consideration.

The 4X HD has 16GB of internal memory while the Vu has 32GB of internal memory and the Galaxy Note has 16GB onboard memory, expandable to 32GB with optional microSD card. Moving on to cameras then and if you’re somebody that uses your phone for most of your photography needs this could normally be a deciding factor, although with these three handsets there’s really not much in it. The 4X HD has an 8-megapixel rear camera with LED flash and 1.3-megapixel front-facing shooter while the Vu has the same set up. The Galaxy Note also has an 8-megapixel rear camera with LED flash but steps up to a 2-megapixel front-facing camera.

If battery power is a consideration for you then we can tell you that the 4X HD has a 2150mAH battery, the Vu a 2080mAH and the Galaxy Note a 2500mAh battery for that extra bit of juice. Operating systems are always an important factor when choosing a new smartphone and these all use the Android platform. The Optimus Vu and the Galaxy Note both run on Android 2.3 Gingerbread though, although updates will come. However the Optimus 4X HD will launch on Android 4.0 Ice Cream Sandwich so some may want to hang on for that. Price-wise the Galaxy Note is available for $299 on the usual two-year contract while prices for the two LG phones in this comparison have not yet been revealed. We’d expect more news on that soon, possibly at MWC next week. One more thing to take into account is that the LG Vu and Galaxy Note both come with a stylus but there’s no mention of a stylus yet for the 4X HD.

There’s a lot to consider when trying to choose a new smartphone but hopefully there are some pointers here to help you decide which of these three options might be best for you. Ultimately they are all extremely decent smartphones and any one of these should serve you well but we’d like to hear which one you might opt for? What was the factor that swung your decision? Why not let us know by sending us your comments. 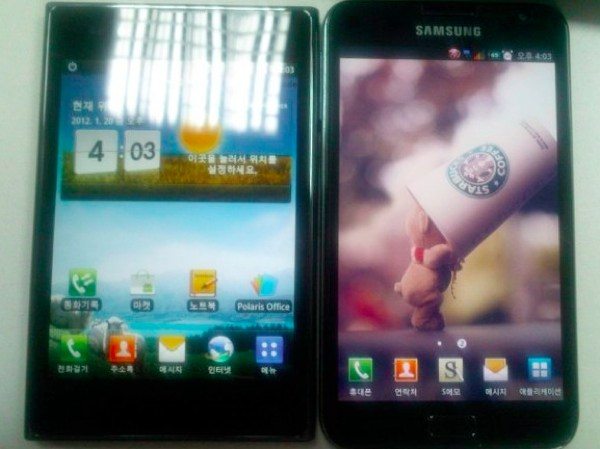