Android Apex Launcher vs Nova, both out of beta

Android enthusiasts who like to customize their homescreens will be pleased to learn that two personalization apps enabling that are now both out of beta. They’re available right now from Google Play, (previously Android Market), and we’re taking a look at the Apex Launcher vs. Nova Launcher to see what they have to offer.

Both of these will allow those with Android 4.0 Ice Cream Sandwich devices to customize their homescreens and better still, both are free apps (with a paid option for Nova Launcher). Firstly we’ll focus on Apex Launcher, version 1.0.1 that has just arrived on Google Play. Features include customizable homescreen grid size and 9 homescreen options, a scrollable dock with up to 7 icons per page (5 pages), infinite and elastic scrolling, transition effects, customizable icons and labels, the ability to hide elements and also choose different folder preview styles. Users are also able to lock the desktop, use homescreen gestures, back up and restore settings and data and much more.

Apex Launcher is optimized for both smartphones and tablets. One note from the developers is that because of Android framework limitations, users will not be able to add widgets from the drawer unless the launcher is installed as a system app, with a root required for that. User reviews for Apex Launcher so far are very promising with a 4.8 rating from 5. You can check out more about Apex Launcher at this Google Play link that also shows tips and permissions information.

Turning our attention to Nova Launcher, this is version 1.0.1 that became available on February 24. Features include a custom grid, scrollable dock (this time with 7 icons per page, up to 3 pages), scroll effects, infinite scroll, folder icons, the ability to backup and restore settings and more. There are also extras available for the Nova Launcher Prime app which is a paid version offering more scroll effects, the ability to hide apps, the use of dock swipes and other features. You can find out more about Nova Launcher (free version) at this Google Play link, or the paid version at this Google Play link and the free app also has a high user rating, currently standing at 4.7 from 5. Again, very good but not quite so high as the Apex Launcher.

The first set of screenshots we’ve shown below this story are for Apex Launcher and the second set are for Nova Launcher. It will certainly be interesting over time to see which of these ICS customizing apps comes out on top. We’d like to know which one you would choose? Maybe you already have experience of one of these apps, or both, and could tell us what you think? Let us know with your comments. 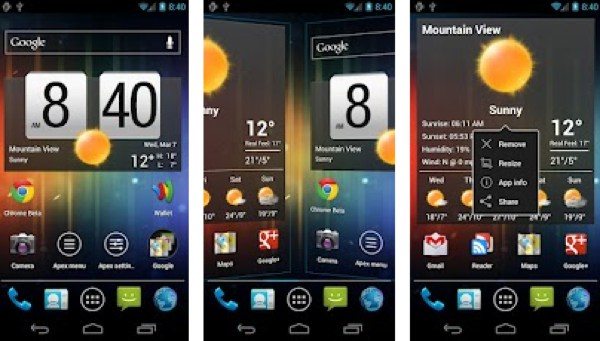 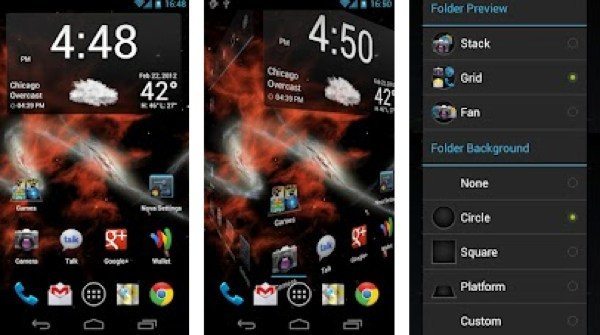 7 thoughts on “Android Apex Launcher vs Nova, both out of beta”