During SXSW both Samsung and Angry Birds maker Rovio were on hand to show off the upcoming Angry Birds Space game for mobile devices, and what we have for your viewing consideration below is a demonstration of Angry Birds Space playing nice on the Samsung Galaxy Note.

As Angry Birds fans will know, Angry Birds Space is the latest iteration of the hugely popular multi-platform game but this time round has a physics approach, and obviously takes place in outer space and thus makes use of gravitational forces to beat them pesky green pigs. 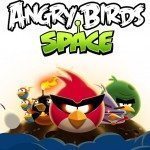