Microsoft may allow Windows 7 apps to run on WP8

As you are no doubt aware, Microsoft’s latest OS is Windows 8, and apparently the latest word doing the rounds is that Microsoft may allow Windows 7 applications to play nice on Windows 8, and possibly all 70,000 WP7 apps along with all Windows 8 apps.

According to an article over on Extreme Tech the rumour originates from the I’m A WP7 application according to WMPoweruser, the I’m A WP7 app reports the version numbers that operate said app, and the first two entries in the image below show Windows Phone 7 apps whilst the lower entry shows Windows 8.0 Desktop v6.28283.0.

Apparently the present build of Windows 8 Consumer Preview is v6.2.8250.0, and as such it does appear that Microsoft is testing Windows Phone 7 applications on internal builds of Windows 8.

The guys say that it could be Windows Phone 7 apps simply running in a Windows 8 development environment however Jupiter is mentioned, and although not confirmed, Jupiter is a codename that is thought to be one of the core libraries that power the new Metro style Windows 8 applications.

If true, whilst it is quite easy to say Microsoft is taking a leaf out of the Google and Apple book, obviously it would be of advantage to both customers and developers if Windows 8 arrives sports as many apps as possible, and if Microsoft allows developers to write single apps that can go across the whole ecosystem then it could become quite a challenger to Android and iOS. 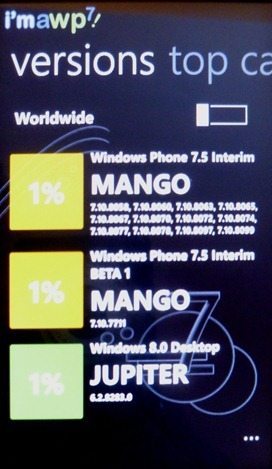