Not too long ago a 12-inch action figure of the late Apple CEO, Steve Jobs surfaced, and as I’m sure you are aware, Apple wasn’t too pleased and threatened legal action against the Chinese company that offered the Jobs doll; however it appears yet another Steve Jobs doll has surfaced and is now available to pre-order.

According to the guys over at Ubergizmo by way of Cult of Mac, Throwboy has now come up with the iCEO doll, which depicts the late Steve Jobs including that trademark black turtleneck, blue jeans, and running shoes.

The iCEO doll is a limited edition, and even includes a removable pair of round spectacles along with the likeness of Steve Jobs sporting a cheeky smile, apparently there will only be 1200 of the iCEO doll made and will cost 60-bucks apiece.

The iCEO doll is 15-inches high and can be pre-ordered as of right now, with an expected shipping date of sometime around August, and apparently Throwboy will donate 10 percent of proceeding from the sale of the iCEO doll to the American Cancer Society.

Having said that, Apple has slapped a block on any doll that looks like Steve Jobs in the past, so they could well get their legal guns moving into action once they know about the iCEO, or perhaps this time the iOS faithful will be allowed to own a Steve Jobs look-alike.

So will any of our iOS faithful readers out there be shoving in a pre-order for the ICEO Steve Jobs doll? 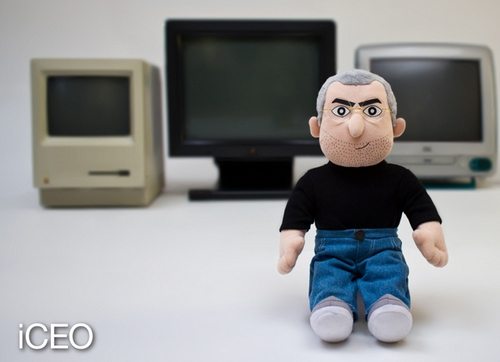