The new iPad has been out for a while now with the iOS faithful having the latest iOS slate in their hands, but what do those owners think of the latest bit of tablet tech from the Apple camp? Well a recent survey of 200 new iPad owners looks at their impressions of the device, and the survey was conducted from the 22nd of March to the 28th.

The survey from ChangeWave Research shows overall satisfaction with the new iPad along with key likes and dislikes and the impact of that reported heat problem some have seen with the new Apple slate.

So there you have it, the latest survey on what new iPad owners think about the new iPad, but we’d love to hear from our new iPad owning readers out there about what they like and dislike about their new iPad, so feel free to share your opinions to our comments area below. 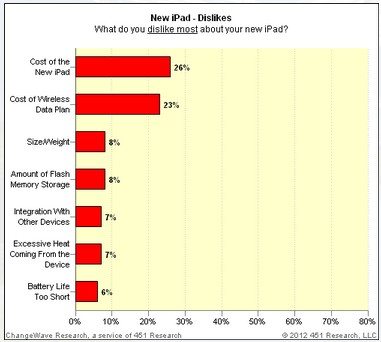